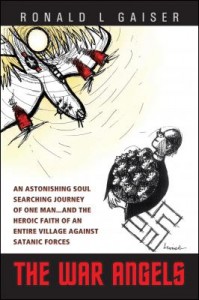 High in the snow-capped mountains of southern Poland, in the remote village of Praznik, a beautiful Polish woman, an outlaw priest with a mysterious past, and a brute of a partisan leader, hide a ragtag band of Jewish children escaped from an accidental ‘Death Train’ wreck.

The priest, who is actually a renowned Jewish surgeon disguised as a man of the cloth, tells the children the Old Testament Bible story of Elisha. “God sent his special ‘War Angels’ to protect the children of Israel from the attacking Syrian army,” he said. The children ask the priest to pray with them for ‘War Angels,’ like in the Bible story, to protect them from the Nazis relentless search for their capture.

Miraculously, a B-17 bomber carrying a crew of battered American flyers from a deep penetration raid over Germany crash lands next to the village. The children, and the villagers, renew their faith in God, believing the Americans to be the answer to prayer, and… The War Angels.